How the World Changed with COVID-19

A grandmother's perspective on relationships, mental well-being and an uncertain future 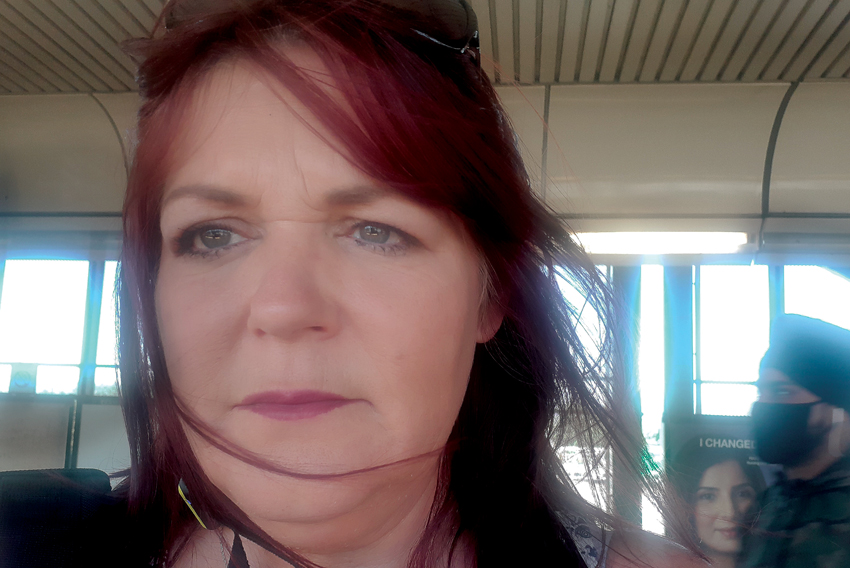 When I was asked to contribute my COVID-19 story for the upcoming issue of Visions, I never imag-ined the difficulties I would be facing within myself when I began writing. Right now, I feel like I'm focused on everyone else. I'm trying to hold my life together, but I feel like I'm living everyone else's life rather than my own. Things have changed so drastically in just a few months. But I know I have to make a few more changes and start living the life that I want to live.

In December 2019, after living with my long-term partner for a year in the Guildford Shelter (run by the Lookout Housing and Health Society), six of us finally found a place to live together.

I was hopeful. I felt I finally had a plan. At the shelter, I had spent a lot of time volunteering. I fundraised for and started the shelter's kitchen garden—herbs, vegetables and perennials—and began working in the kitchen, satisfying my longtime love of cooking. I had done things I never thought I could do, and I had so much confidence. I was ready to bring that new confidence to my 18-year relationship. My long-term partner was one of my five roommates. We decided to give our relationship another chance.

But despite my new-found confidence, that particular fantasy ended quickly. The relationship had run its course. We remained friends—and roommates—but it was clear we couldn't remain romantic partners.

At the end of January 2020, I went to Squamish to visit a friend I hadn't seen in 20 years. There, I met a man who was 15 years older than me. We liked each other. After I came back home, we started seeing each other. At first, things were moving along slowly, which is what I wanted. But at the end of February, things started to get very serious with COVID-19, and this affected our relationship.

The man I was dating lived and worked on Mitchell Island, in the north arm of the Fraser River. As the pandemic worsened, he became so fearful of being in contact with anyone that he asked me to stay with him in isolation on the island for the foreseeable future. We had no idea what was ahead, so I agreed. But I couldn’t do it for much more than five days. I was going crazy there—I called it The Compound. I swear at times we were the only ones on the island. He basically locked himself down. He wouldn't go out. He had people bringing him groceries. If we did go out, he would be nervous and jumpy. The fear that he had was just crazy. All he could think of was COVID-19.

And, honestly, I had a home that I missed. I lived with five other people I cared about. So I left Mitchell Island and went home to isolate myself with the other members of the household. My friend would come out every few days to see me—but at a six-foot distance. I was his girlfriend, yet he felt he couldn't come near me! He seemed to be mentally deteriorating more and more every day. He was becoming very insecure. Even at a distance, I felt smothered. I had to end it, and that's exactly what I did.

At home, I lived in a very small social bubble that included my roommates and my four-year-old granddaughter, who would come to visit every other week and stay for four or five days each time. My daughter and her two children also live in a small social bubble, so we weren't too worried about exposure to the virus. And my granddaughter's delightful presence in our home really helped. Although I talked to my daughter on the phone, I didn't spend a lot of time with her or the baby because my daughter has her own physical and mental health challenges. I helped by taking care of the older grandchild whenever I could. I have two sons as well, but both live on their own and neither of them has children.

Everyone in the house was aware that our choices about what we did would affect everyone else. For example, my ex has a daughter who came to stay with us briefly, but she lives a high-risk lifestyle and kept going out and socializing with other people. The rest of us were isolating ourselves as much as possible. Only one of us would go to the grocery store. But my ex's daughter continued to go out at night and engage in high-risk activities. It got to the point where we had to ask her to move out.

Even though we all shared the same busy house, I felt more and more isolated. Over time, I became increasingly lonely. On one of my last days visiting the Guildford Shelter, I discovered that a close friend was having some difficulties there; I invited her to stay with me. It was great to have somebody to talk to. A few roommates were not too happy about me bringing her home, but we were careful about things, continuing to keep ourselves socially distant from the rest of the world.

One of the things that's become really clear to me during the pandemic is how difficult it is to live in the Lower Mainland and keep your social bubble small. Rent is so high that many adults can't afford to live on their own. But as soon as you have roommates, their families become your family, their social bubble becomes your social bubble. Their mental health challenges and medical challenges become part of your world, too. A social bubble of six? Are you kidding me? Our household of unrelated adults is six. That doesn't include our kids, our grandkids, our parents, our close friends, the people who are really important to us—that's just the people who live in the house.

The past few months blur together. I remember thinking at one point that I just wanted to run away—but I realized quickly that there was nowhere to go: the pandemic affects the whole world. When people first said that COVID-19 would be with us for 18 months, I thought it was ridiculous. I see now that if COVID-19 is with us for only 18 months, we will be lucky.

Early on, I would take my grand-daughter for walks; she couldn't understand why she couldn't go to the playground and play. Listening to a four-year-old trying to understand the "sickness," as she calls it, broke my heart. I worry about her future in this world. I worry about the future of everybody. I honestly can't see things reverting back. Every time I talk about COVID-19 and the future, I get anxious and I have trouble focusing.

Sometimes it feels like the world is imploding. My daughter recently had her second major health scare this year. She's improved drastically, but I'm still trying to help her with the kids. One of my roommates is very ill with cancer and will likely not live very long. My ex is battling depression. I'm trying to be there for everyone but I'm just putting on a brave front. Inside, I'm scared. I feel like life will never go back to normal.

But slowly, as the pandemic has dragged on, I have begun to re-think how I am living my life. I know that I have to make changes—for my own mental well-being. I have spent too long focusing on others. I know I need to start focusing on myself.

As I've spent more time helping my daughter, I've spent less time with my roommates, which is probably a good thing. Over the past six months, as we've had to count on each other more, my daughter and I have become closer, and I've had more time to consider what is important to me.

All my life, I feel like I've been trying to help everyone else. I know that helping others and working with people is valuable to me. But I have to do it in a way that gives me what I need for my own mental well-being. I can't make others want what I want. But if something that is personally fulfilling to me is also helpful to others, then that's a good place to start.

Recently, I catered a small event for a friend. It reminded me how happy I am to cook for other people—and it's something that satisfies my own soul, too. I've started to research culinary schools. I would love to one day run a shelter kitchen with its own kitchen garden. I think that would be a great way to satisfy my own needs and give something back to others.

I know there is no way we can get through COVID-19 if we aren't taking care of our mental health. I wish I could fix the world. But I'm going to start with me.

Rebecca lives in the Lower Mainland. She has two sons, a daughter and two grandchildren. She loves helping others and she loves to cook