Unexpected observations about the pandemic from the street 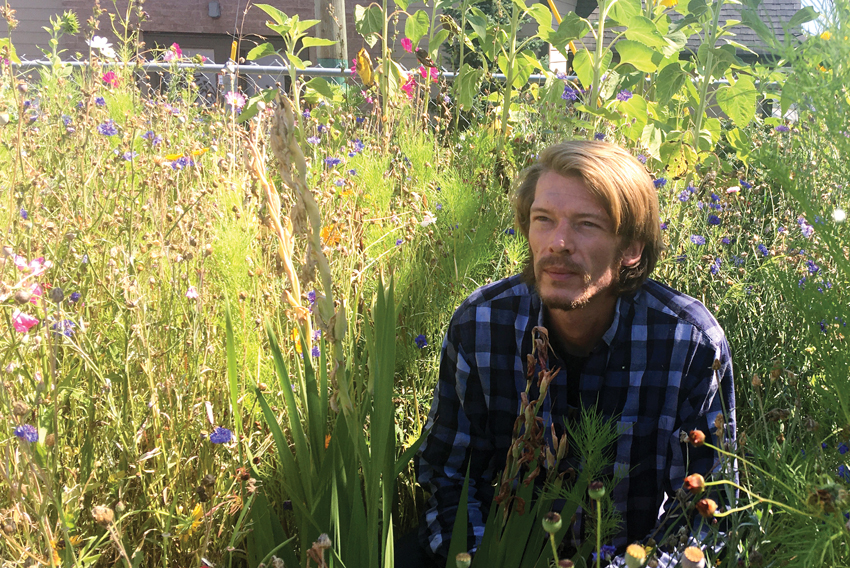 I live in Nanaimo. Before COVID-19, I’d spend a lot of my time at the library. Now, the library’s closed. Like most other places, there’s a ghost-town feel.

Nowadays I pretty much work all day. I work with the Wisteria Community Association charity. We get donations—clothing and stuff people don’t need anymore. Most nights the clothing goes by van to Wesley Street [where homeless people gather in Nanaimo due to the services available there]. Wisteria has a coffee and bagged-lunch thing every night there. They started the service when COVID-19 hit and haven’t missed a day.

One of the interesting things in my work is some of the clothing comes from boutique shops, so there’ll be Tommy Hilfiger, Giorgio Armani or Polo shirts. I’m always thinking we must have the poshest homeless people here. They must not look homeless sometimes.

I wasn’t working here before the pandemic. Niki [a volunteer at Wisteria] helped me, pointed me in the direction. I was going to Wesley Street and having coffee and talking to the people there pretty much every day. Niki was with them. She suggested I volunteer. It was just the right fit, actually what I’ve always wanted to do.

Most jobs never satisfied me in any way; I didn’t have any connection to the work. And those jobs paid, whereas this job doesn’t pay and yet I’d rather be here doing this than somewhere else getting paid. This is more fulfilling.

Along with my work I also do art. All kinds—even paint on canvas—but mostly pencil drawing for the last year or two. I’ve always done some kind of art or drawing, but I never had any control over it, really; I just tried to draw. Then, during the pandemic, I had more time to focus on it. At the same time that my art improved, so did my linguistic skills and social skills and my abilities to recognize when things or ideas lacked definition.

I usually don’t draw an image across a whole page; I’ll draw something and when I’m done, I’ll draw something else and the page will be covered in a bunch of different things, each piece a unique thought with its own meaning, like a meme. A lot of artists start with the shapes and then fill the shapes in. I just start in one place and go from there.

I share my art. People offer to buy it, but I say no; to me, art’s value is not about how much money it costs. How do you valuate a message? I don’t want to see or make a connection between money and art. So I’ll just give my art away or offer to draw something for somebody. 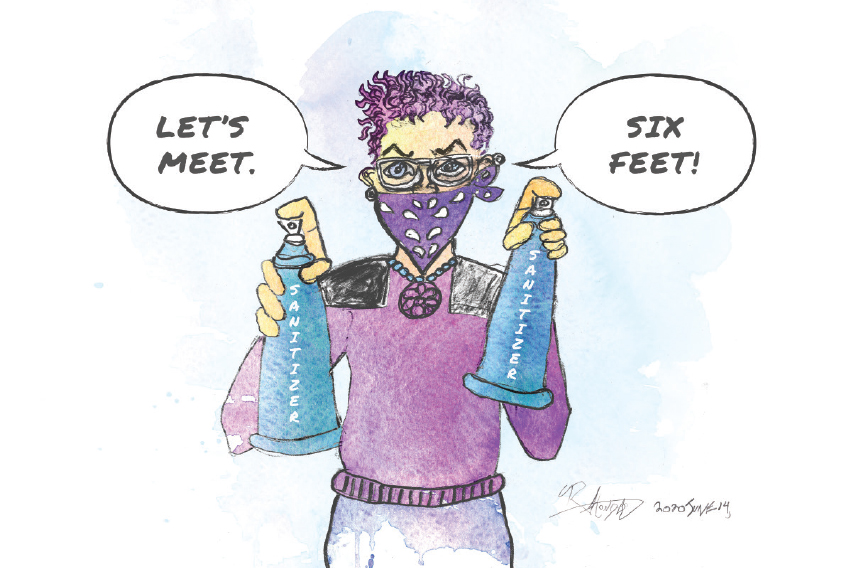 Artist name: Rhonda Coughlin, Nanaimo B.C | Artist statement: Coronavirus is Real, SERIOUS, and we all know that laughter is the best medicine at least for our sanity; so I thought that I would put a comical twist on things to draw your attention to a serious matter, and now it has morphed into my own design and marketing company, so go ahead and order your very own Six Feet postcard and let us meet! yourattention.draw.n@gmail.com

The pandemic has put a lot of things into perspective. A lot of people went after the COVID-19 money [provincial and federal benefits] simply because it was free money. I was hesitant. I watched what people would do with the money. I don’t think I’ve seen one person who used it for any real use, wasn’t just buying drugs or blowing it on whatever. I was at the shelter and there were people who had money to get out of the shelter, but that didn’t even cross their mind. It kind of felt like we were in a dangerous moment, but people’s choices didn’t really change.

Because homeless people are treated as a different group within society, the messages given to the general population by government may not be perceived by the homeless in the same way. Financial benefits may not be seen the same way either. The needs of people who are housed are not necessarily the same needs as people who aren’t housed. What we need is to be reconnected with family and to be sheltered and fed. We don’t need money.

So I haven’t accessed the benefit yet. I was thinking about how the money is supposed to be for people who were put out by COVID-19. If COVID-19 got in the way of living, you could access some money; it’s there for that. But that’s not me. This is the only time where I’ve actually been happiest. Not accessing that money made me understand my situation a bit more. With this whole COVID-19 thing, I’ve never felt better.

[Being homeless] is a different way of life. Unless you’ve been homeless, you wouldn’t understand it. From a position of being “homeful,” you have an idea of what homelessness might be like, but it’s just based on your fear of being homeless.

Once you’re homeless, it feels like you’re taking a step backwards to get back into a home. You feel like you have to become something—become fake, create a persona, be something else. Society naturally shuns [those at the] bottom. But when you’re at the bottom, you see that it’s not what you’ve been told to shun the whole time. Homelessness just strips away everything. So people at the bottom, their problems are on the surface. It’s easier to understand them. Other people hide their problems; [their problems] usually end up being turned around and pushed out at people around them.

The people I’m around are more honest. Once your social persona falls away, then the veil has lifted. There are no masks at the bottom. You see what you were once a part of, but you’ve evolved beyond that. So it kind of feels like you’re devolving to go back into a home—almost like you’re putting a mask back on—because you’re going back to being someone who looks down on people who are below you.

If I [moved back into a home], my ideal home would have people. A couple years ago, I lived in Victoria in a big [communal] home with 32 rooms. The rooms were pretty small and you had to share the bathrooms and everybody would share the two kitchens. It was just a lot of international students, always lots of young people—it was awesome. It was like seeing all the world’s cultures under the same roof. If there’s a shared vision, everything can work really well. In the house, the thing on everyone’s mind was learning. Once you left the house, you were back in the land of capitalism. The house was an oasis. No hint of racism. It was the best place I lived, the best experience.

On the street, you never truly have privacy. The nature of privacy changes. The closest you’ll get [to privacy or isolation] is locking yourself in a bathroom (and it’s not your own bathroom).

Losing all privacy, in a way, is unsettling. Yet it must be healthy. After all, we can never escape society. [When you don’t ever have privacy], you start to notice you don’t really need privacy—the desire for privacy is just a childish thing. The richer you are, the more you crave privacy. But privacy is really just the silence of everything and everyone you don’t want.

In my world, COVID-19 is just the latest crisis—the loudest crisis but also the least threatening—the squeaky wheel. I’ve heard of only one person with a family member who tested positive for COVID-19. But I know people who have died from fentanyl in the last couple years and I know many more people who have become addicted in the past few months. I’ve also known people who needed Narcan [overdose prevention medicine] multiple times. With fentanyl, people are dying all the time. I don’t know: maybe the drugs are worse.

Government tells us to be doing these things for COVID-19: gloves and masks and distancing. But to homeless people, it feels like nobody gives a shit [about us]. So not wearing the masks or handwashing, not acting like we’re in a pandemic—that’s the response. It’s like being asked to dance by people who never asked us to dance before. Suddenly homeless people are supposed to care; yet we’ve never been cared for before.

If society has turned its back on the homeless, how much can it expect the homeless to listen to its message? Homelessness was not being solved before the pandemic; how does the government expect it to be solved now, simply by throwing money at it? With the normal resources closed or limited in their capacity, there are fewer places for us to go.

[Most of] the problems of homeless people come down to what happened with family, with parents, with a fight that was never resolved. They spend the rest of their lives punishing themselves, doing risky things because they want somebody to care. They’re trying to get attention by harming themselves. They have a gap in themselves and they need to fill that gap. When you’re high on drugs, you can get away from the harmful thoughts and memories.

The import of human connection

This interview and the series of phone calls it generated are actually the first phone calls [anyone has made] directly to me in over a year. People need to reach out to each other. We have all these things that connect us, but the thing is, we also have the ability to not connect as well. It takes two to connect but it also takes two to not connect.

If you have people who care about you, and take the time to reconnect with you, then you end up caring about yourself more. When someone goes out of their way to make you feel like you’re not nothing, especially someone who’s not in your family (like Niki was to me), with that kind of support, you can do anything.

People don’t have support structures now, so they’re collapsing. But any kind of support in any way is awesome. Any. Ever. When COVID-19 hit, everybody didn’t want to associate [with each other] as much. But now is when you see who is going to be there when something happens. Now is a good time to reach out to people. If you need someone, realize you are half of that connection—you should be reaching out as well. It’s not just about catching. It’s about throwing, too. Now is the time to play ball.

Editor’s update: Since the interview, J.W.B. has reconnected with his ex-partner, young son, Daxz, and stepdaughter, Willow, as well as his parents. His experiences during the pandemic have prompted him to reflect on what changes he’d like to make in his life.

J.B.W. lives in Nanaimo and has just reconnected with friends and family that he had previously lost contact with

Based on an interview with Sarah Hamid-Balma