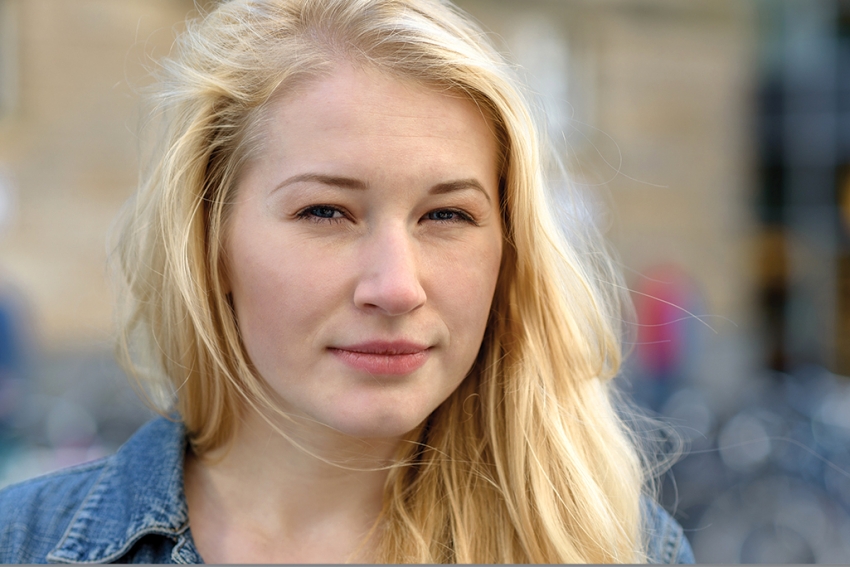 I can remember the day I had my first real obsessive-compulsive disorder (OCD) thought. As a young girl, I worried about my friends, family and school work, and I struggled with perfectionism, but this was the first time I became obsessed over one thought. I was sitting on the couch, watching TV with my dad while we were on vacation in Palm Desert, California, when I thought, What if you didn’t clean your hands enough? What if you still have pee on your leg?

I got up and went to the bathroom and spent the next 20 minutes washing my legs with soap and water. Then I spent a long time washing my hands. But when I returned to the couch, the same thought came back. Within days, these sorts of thoughts had escalated and I went through a full container of hand soap. I knew something was wrong. I was scared; my parents were scared. We didn’t know what was happening.

Meanie. That’s the name I gave my obsessive thoughts, or what I think of as the monster in my head. I wish now that I had picked a better name, but at 13 years old, I felt the name was a good one. Giving it a name was really important to me; it allowed me to classify it, to separate it from myself. It was a lot easier to have a conversation about (and with!) my monster once I could address it. I felt more powerful when I could say, “That’s just Meanie talking,” or “Go away, Meanie!”

When we returned home from vacation, after much convincing and many tears, I saw a psychologist. She diagnosed me with obsessive-compulsive disorder. At the time, I did not know much about OCD except as a term that some people used to describe themselves or others when they were neurotic about cleanliness or organization. When I actually experienced the struggles of OCD, I realized there was much more to it than that.

There are many different types of OCD. I was diagnosed with contamination OCD. My biggest obsession was over the cleanliness of my hair and anything to do with the bathroom. I had beautiful, long blonde hair that gave me a lot of confidence, but my hair was a great target for Meanie. Eventually I became afraid of the toilet, certain walls of the house, laundry and particular parts of my body (especially the backs of my legs because they would touch the toilet when I went to the bathroom). I viewed all of these things as contaminated. I even viewed my parents as contaminated if I saw them touch something that I thought was unclean.

My brain felt constantly punched and slapped by these thoughts, which would then stick to my mind like Velcro. In fact, I sometimes felt like I had two brains—my common-sense brain and my OCD brain—and they would argue continuously with each other. One thought in particular used to always stick: What if your friends never want to hang out with you again because you are so gross? This kind of thought was difficult to deal with because I valued my friendships. I felt as if I was contaminated. And the more I used that kind of language with myself, the more I felt it to be true.

After three months, my OCD thoughts and compulsions had left me completely debilitated. I couldn’t go to school, I wore shower caps to protect my hair, I held my arms up in the air to avoid touching something contaminated and I went to hair salons because I was too afraid to shower. I stopped eating and drinking because I didn’t want to use the bathroom. My rituals were so tiring that I didn’t want to face them anymore. My hands and forearms had begun to bleed from all the washing I was doing.

One of the things that helped me accept my disorder was learning exactly what was going on in my brain from a scientific perspective. Understanding more about hormones and other parts of my brain was fascinating, but more importantly, knowing this information took the power away from the disorder. It no longer felt like a huge, scary illness; it was simply a chemical problem that needed some tweaking. You could say that I regained control over my OCD with education.

Another vital component to beating my OCD fears was exposure. Exposure is a process in which, gradually and incrementally over time, you face the thing that causes you fear or anxiety. If you are afraid of heights, for example, you might slowly work your way up to standing on a 10-metre-high diving board. In my cognitive-behavioural therapy sessions, my psychologist and I planned out a series of exposures. These included standing in the bathroom and not washing my hands, starting to take showers again (at first fully dressed because I was too scared to be naked as that meant more parts of my body could get contaminated), and then dancing with dirty underwear on my head. My most memorable exposure was when I worked myself up to hugging the toilet and rubbing my hair all over the porcelain.

Imagine facing your fears multiple times a day, every single day, for months. It was awful, but it was a vital step towards my regaining self-control. Essentially, I retrained my brain to turn off its OCD switch. I had the most success in exposure therapy when I imagined myself the way I aspired to be: OCD-free with my friends, my hair hanging down, dancing. I also constantly challenged my OCD thoughts by repeating to myself a series of personally helpful phrases: What would my friend do? And So what? Even Maybe I did touch the toilet seat, but I don’t care and my family will still love me. These phrases would usually shut my OCD brain up for a while, and they reminded me that I am in control of my thoughts.

At the time, I told only my closest friends that I had OCD. Some were helpful and some weren’t. When I told my closest friend that I had OCD, for example, she laughed. I believe she laughed because she was uncomfortable, but it still hurt my feelings. Other friends would tell me to “Hurry up!” while I was in the middle of doing a compulsive action.

But to be fair, mental illness is difficult even for adults to understand—let alone 13-year-old girls. The most helpful friends were those who didn’t rush me during my rituals, and when I seemed extremely afraid, they were the ones to tell me that I would be okay. I relied on them to tell me what “normal” looked like. I used to ask, “If you went to the bathroom and your hair touched the toilet, would you wash your hair?” Sometimes I would watch a friend who also had long hair, to see how she would act, how comfortable she was if her hair flipped around and touched everything. Sometimes I would try to imitate her.

It was a long journey, but after three years of intense therapy, thousands of hours of exposure and support from my psychologist, family, friends and school, I was finally able to control my OCD. Looking back, I know that one of the most important factors in my recovery was that I did share my struggles with family and friends. How would I ever have got the help I needed if I hadn’t shared my experiences with those closest to me?

When I struggled during class, I would go up to my teacher and say, “My OCD is giving me a really hard time right now. Could I please go outside for a walk?” And she would say, “Take as much time as you need.” Perhaps she didn’t fully understand my disorder, but she understood that I was anxious, and her words were compassionate. I think it also helped that I was able to articulate so clearly what I was experiencing, what was causing me stress and what I needed at that moment.

There are still moments when OCD thoughts return, but with the skills I have developed and the trust I have established with family, friends, teachers and medical practitioners, I am able to manage them. I am now able to channel that analytical brain of mine so that it benefits me rather than hindering me. I run the Mental Health Club at my school and give frequent presentations to students and teachers about the significance of mental health care and wellness. These opportunities have helped me combat stigma around mental health, while also giving me a great platform to talk openly about my struggles with OCD.

One of the things I emphasize in my presentations is the importance of the words we use. We need to use the right vocabulary for the situation.

For example, there is a big difference between having obsessive-compulsive disorder and displaying obsessive-compulsive tendencies. Obsessive-compulsive disorder is a debilitating mental illness that prevents an individual from living a full life. An obsessive-compulsive tendency is something a person might do to feel comfortable but doing it doesn’t prevent them from having relationships or performing daily activities. Usually when people say, “That’s so OCD,” they are describing OCD tendencies. Using the wrong description for a behaviour can minimize the experiences of someone genuinely struggling with OCD. At the same time, comparing a tendency to a disorder can ascribe an undeserved gravity to behaviours that, while they may seem odd, are completely harmless in a healthy individual.

As a young adult, I now consider OCD to be a gift. I have a brain that can analyze and interpret things on a level that not many others can, and I think that is pretty cool. I am fortunate to have supportive parents who always remind me how much they love me and how strong I am. We talk often about the fact that many successful and intelligent people have a mental illness; part of me likes to think that I may be a member of their elite club. My journey has been difficult, but the skills I have learned and the knowledge I have gained will support me in the years to come.

Leah was born in Vancouver and is 18 years old. She is a high-level competitive golfer and hopes to become professional. She enjoys weight lifting, baking and waterskiing. Leah has served on various panels and has taken part in educational seminars to speak about her experience with obsessive-compulsive disorder (OCD)