Living a Good Life—With or Without Opioids

It all comes down to decent, safe housing 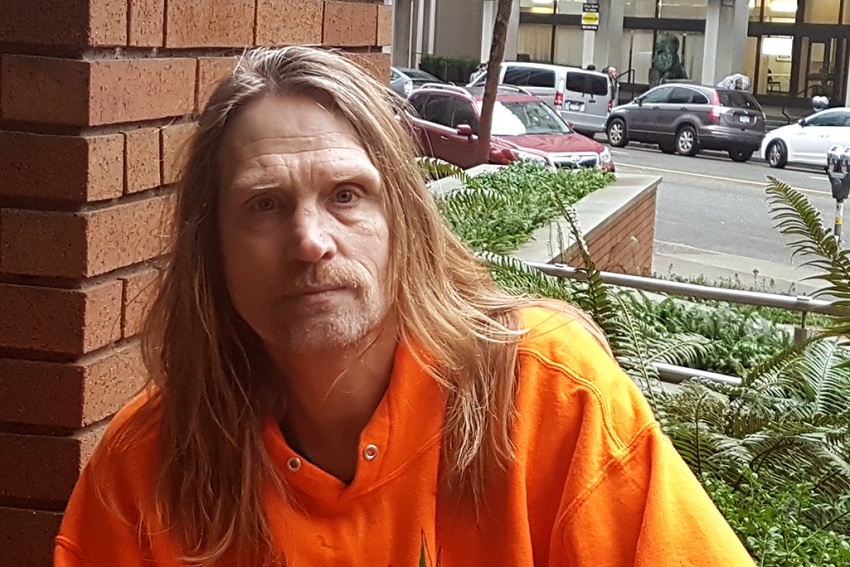 I first started using heroin in the late 90s. I was in Matsqui Penitentiary, so it was just a way to get high and escape reality. I was 32 years old. I had started off young, sniffing gas and glue as a kid, and I smoke and drank. Everything was just another means to escape.

Before I was sent to the penitentiary, I was living in Nelson—Procter, actually. I’m really a Procter boy, if you know Kootenay Lake at all.

I did my parole in Vernon. By that time, I wasn’t using heroin. It wasn’t difficult to stop; I hadn’t been using every day, so I wasn’t wired or dope-sick.

Then, in the late 1990s, I was in a few bad car accidents and one of my vertebrae was cracked. When I was released from the hospital, I was basically just told, “Well, go home and lay on the couch for a couple years.”

A friend of mine in Vernon—it’s funny, his name is Al, too—his dad was getting a big bottle of morphine every month. He sold them to us dirt cheap. That’s when I started using again. This time, I was using to deal with the pain. Morphine definitely helped with the pain. We used every day. The funny thing is, my friend’s dad tried to blame me for getting Al wired—even though Al’s dad was the one selling us the pills!

I figured we were grown adults, so the only person I was harming was myself. I wasn’t stealing money. If we had a bad day, all we’d have to scrape up was $10 (back then), and we could just split that one pill. It’s not like we were taking 100 pills a day. We were just keeping our habit at bay.

Me and my wife were in Vernon a couple years and then we went up to Prince George. In Prince George, we had housing—a three-bedroom trailer and five acres. I had a different lifestyle, then, growing marijuana. No more daily morphine pills. The price of opioids in Prince George was just stupid. I wasn’t gonna pay $50 for a pill that might be unsafe. Up there I just dabbled once in a while, and I wasn’t dope-sick.

So we come down here and we’re staying at the First United Church. A friend of mine said he knew a hotel we could live in if one of us was on methadone.

We didn’t have other housing options. That’s why I went on the methadone program—to get us housing. That’s the only reason. And that got me tied into the Palace Hotel and that whole story.1 It all comes down to decent, safe housing.

With the methadone program, I went to the clinic every day, seven days a week. I’m kind of a late-afternoon guy, so I wouldn’t go first thing. If you get the methadone at 9 am, come 5 or 6 o’clock the next morning, you’re going to start flopping around. With my routine, I can have a good night’s sleep and get up in the morning without feeling sick.

I started on methadone in 2010. Four years later, the program started using methadose. BCAPOM (British Columbia Association for People on Methadone) had two weeks’ warning that it was coming. The province said it was safer, harder to take out of the pharmacies.

But it made a big difference to me. With methadone, I felt better. I could drink my dose and I could go 36 hours sometimes without needing another one. With methadose, I have no energy, no get-up-and-go to accomplish anything. And methadose reacts with the antidepressants I was on. It screws up your heart rhythm or something, so now I can’t take any antidepressants.

The importance of lived experience: The patient handbook

With the opioid problem, doctors are now having this knee-jerk reaction: they’ve cut off everyone’s pain meds, their valium, everything. For years, they prescribed these to their patients, and then all of a sudden, because some guy comes out with a study or some guidelines, it’s started this whole friggin’ crisis we’re living in. Now, all these chronic-pain patients are going to the black market. But the black market isn’t safe anymore.

Seeing a doctor every two weeks and walking into a pharmacy every day is belittling right from the word “go.” I know that if I was, say, diabetic, and the medication my doctor is giving me is not working and I’m killing my body and stuff, the doctor would say, “Okay, let’s discuss what’s going on.” But the methadone doctors? “You quit chipping [using once in a while], or you’re cut off.” How does that solve anything? So what if the guy wants to chip? That’s his harm reduction, on really bad days. But the methadone doctors cut you off if you can’t stay on the program.

Now the methadone program is run by BC Centre for Substance Use instead of the College of Pharmacists. I work for the centre as a peer research assistant. But a doctor who learned about methadone 25 years ago, they really get stuck in their ways and we can’t tell them anything. “Oh no, it doesn’t affect you that way.” “Yeah, it does, we’ve actually lived through this.” That’s part of the stigma of being a drug user and being on methadone: we’re not listened to as individuals with something important to say. We’re mostly seen just as dirty ex-junkies who’re now getting their dope for free.

That’s why a group of us in the methadone program wrote Patients Helping Patients Understand Opioid Substitution Treatment, a handbook about methadone patients’ rights.2 The University of Victoria approached a group of us through BCAPOM. The handbook isn’t written by the doctors or counsellors. It’s by the patients, for the patients, in our language. We let other patients know what they’re going to face. We tell them: this is what’s gonna happen, this is the way you are going to be treated, this is how not to be treated that way.

I do a lot of work nowadays with VANDU [Vancouver Area Network of Drug Users], BCAPOM. We’re on the decriminalize-and-regulate path. It’s funny, up until the 1950s they used to sell laudanum over the counter. Morphine was in just about everything. Big Pharma, they took it over. It’s just some cash grab by some pharmaceutical company is how I see it.

With methadose, a lot of people are relapsing because methadose just metabolizes faster. I’ve been using, because it [methadose] just don’t last. But it’s terrible; it just isn’t working.

Last time Trudeau was in town we did some roundtables; I sat in there and I told him I used to grow my own poppies up in the Kootenays. Because they can grow here. I would take my poppies and bleed them, I’d get that and smoke that in a pipe like oil and then I’d take the rest of the plants, I’d chop them up and I’d make tea. And I’d just leave it in my fridge. It would be so simple: we could grow our own poppies, produce our own.

The funny thing was, January, February, when I ran out of that tea, I wasn’t dope-sick at all because I was taking it naturally, basically just boiling it down and making a tea. No chemicals added to it. I never got sick. I’d drink a cup of that tea a day and I’d be fine. And when it would run out, it would run out; it was no big deal.

I wish I had access to that now. I probably could’ve kicked my habit. I stopped growing poppies because I moved here and lost everything.

Trying to get clean in downtown Vancouver is just ludicrous. The thing with the treatment places is in the majority of them you do the 90-day program and they’re like, “Okay, you’re better now, here’s your welfare cheque, see ya!” You end up living at ground zero. You can’t get out of it.

But we’ve been doing real good the past year, me and my wife. I still get hot flashes from the methadose, but my wife is always supportive. We’ve been together 16 years now. She doesn’t use, never used. Though she doesn’t come with me to the clinic or the pharmacy, she’s involved with BCAPOM, and she comes to the meetings and the protests.

Life has its ups and downs, but our housing is stable (not like the Palace Hotel). We have a good apartment, and our rent is subsidized. It’s nice, we’re out by Commercial now. In this society, so many people are so close to being homeless—it’s like the choice between turning the lights on or having lunch today.

The thing is, I had to go on methadone to get that first housing downtown. I don’t have to use methadose anymore, but now I’m wired to it. And I have me and my wife to support. She’s not in the best of health, we’re both in our 50s. I can’t afford to just quit and be sick for three months.

It’s not like I’m going to treatment either, especially now that I’m on the methadose—most treatment centres don’t accept you on methadose. And abstinence these days isn’t the best idea. People come out of them recovery houses and they’re using again and then they’re dead because they’re getting all this fentanyl.

During Prohibition in the 1920s, people still drank alcohol, they just did it more dangerously. Look how many deaths there were from bad alcohol, alcohol poisoning, blindness, all the violence. Now, it’s exactly the same thing with drug use. There’s all the stigma around using, but people still do it. It’s just more dangerous now.

When I look back at it all, I know that if we could have got into housing without my entering the methadone program, then I would’ve just kicked my habit. Then I wouldn’t be wired to methadose now. It all comes back down to housing again.

Al does peer research for the BC Centre on Substance Use and also works for the Vancouver Area Network of Drug Users (VANDU) and the BC Association for People on Methadone (BCAPOM). He is one of the co-writers of the handbook Patients Helping Patients Understand Opioid Substitution Treatment

Based on an interview with Al Fowler by Sarah Hamid-Balma