A Person of Colour in Recovery 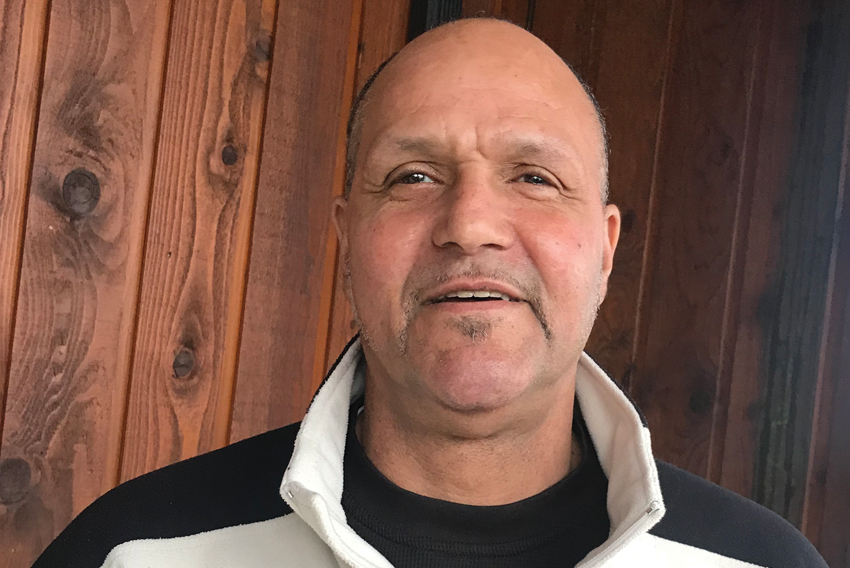 I was born in 1957. A lot of times I say I’m Mulatto. My dad is Black and my Mom is white. I had loving parents. I live in Campbell River. But I grew up in Vancouver, on the East Side.

I was a pretty rambunctious kid. I had a lot of anger. The reason why I would get angry and go off is because people were always against me, fighting me, wouldn’t help me or wouldn’t listen to me because of my colour. It first started with my Grade 2 teacher. I was defensive all the time and I felt like the only way I could get noticed was by being aggressive and difficult. My Grade 6 teacher took me in: she listened and treated me fairly and she was the best teacher I ever had. She put up with my stuff and joked around with me.

But elementary school was terrible. I was accused of things I did not do, and kids would pick fights with me. Teachers were leery of me because of my personality and because of my father: he has a strong Black-man mentality and can come across a good man, but he would dome down heavy if a person hurt or insulted him or his family. This caused some apprehension in how people dealt with me.

By the time I was 13, I was hanging out with people who were older than me and started using drugs. I remember when I was 15, a friend (who was 17) and I had a couple of pellet guns. We were shooting birds when someone called the cops. They came and arrested me and charged me with possession of firearms but they gave [my friend] back his guns and didn’t charge him.  Because my friend was white and wealthy, the friend did not have any trouble with the police, and this did not surprise me.

Racism definitely affects me. I remember my dad would take us for Sunday evening drives in Stanley Park or the West End of Vancouver. My mom, sister and I would be in the back seat. We would get pulled over. Not just for something like speeding or a burnt-out light. We would be driving down the road and the police would drive past looking into our car and pull a big U-turn and then pull us over just to check on what we were doing and who was in the car. This was my introduction to learning how Black people can be targets of racism, because they may have figured my dad was up to no good because he drove nice cars and my mom was white: maybe they thought he was a pimp? He was a big, proud, well-built Black male who looked good, dressed nice.

My dad would say, I can’t even take my family out for a drive without being pulled over because I’m Black. It happened all the time. Back then it was terrible. Indians, Chinese, Blacks—they never got treated the same as white people.

When I left school at age 14 or 15, I started to hang out with people who did not go to school. These people were in a tough scene and this was the only place I felt accepted, so I continued to hang out with them and get into more trouble with them. You know, with all the racism and stuff, it was bullshit. Sure, I made decisions about my life, but I wasn’t able to thrive. I was drinking at 16 years old. I grew up really fast. I’ve been excluded in my life almost all the time. It has to do with my skin tone for sure. It was like no matter what I do, I get shit on. Don’t get me wrong, I did f**k up some things because of my addiction, and there’s people that actually helped me. Not everyone was awful towards me.

My drug usage kind of played into my psyche. I thought I was a normal person until I came here to Campbell River at the age of 46. I went into recovery because I OD’d six times and went on methadone. Once I completed the recovery program, I joined Narcotics Anonymous (NA). One of the sponsors helped me see that my behaviours were not healthy and that I was delusional on dope most of the time.

That is when I realized I had a substance use issue; it was not just recreational. I was not ready to admit this, but I knew deep down that his words made sense. Now I admit I’m an addict, but I never thought that before. I thought I was just a weak person. After that program, I started a mental health care program in Campbell River.

When I was in my early recovery, I went to NA and mental health [appointments], and I had a few sponsors. I was also in contact with a worker at AVI [Health Centre] who supported my recovery and mental health. I learned about self-reflection and how to manage my anger with my mental health worker and with AVI supports. Now I have a small support system with the MOUHSS [Mobile Outreach Unit for Health and Support Services] staff, my dog, and the community I am involved in.

I’ve been here in Campbell River for 18 years. I came out here because I knew I had to address my addiction. I stayed here because the cost of living is cheaper. And I like it here and the supports were here for me. They [the mental health and addictions team at Island Health] had awesome counsellors. They taught me life skills and taught me how to manage myself. All my life I felt like I had to be defensive, with police officers, principals, because the racism was bad. In Campbell River too: when I came, there was only two Black families here. But my NA group and sponsors did not treat me with racist behaviours. When I came out to Campbell River, I got help. Now I’m at a good spot where I don’t go off like I did.

The first time I got stopped by the cops in Campbell River, I was just walking the neighbourhood and clearing my head. It was like 11:00 or 11:30 at night. I’m walking in a neighborhood probably a mile or three-quarters of a mile from my house. Suddenly a cop car with lights on comes over and a female police officer comes out and yells, “What are you doing? We have reports that you’re trying to break into houses.” I told her I was doing no such thing. So she calls another cop. She was really throwing her weight around and raising her voice.

That was my first encounter here—I get accused of breaking and entering just because I’m walking down the street. If a white person was walking, the cops wouldn’t pull over and say that. I’ve done nothing illegal and I get jacked up by the cops. I was treated badly because of my addiction and because I was Black: I think people were fearful of my attitude and because I was a different race and that was not common. Some of the police treated me fairly and equally (like they would a white person), or fairly for the situation I was in. A judge gave me a chance and I realized I needed to stop the stealing and driving impaired, although I still used drugs.

Not all cops are the same. A couple of cops are human beings, but the other cops make assumptions about me. I mean, there are good cops, but the majority of them, it’s like a gang mentality as soon as there’s two cops.

People of Colour [experience] systemic racism. I feel it. Even out here in Campbell River. It’s not as bad as it is in Vancouver because people here are more compassionate. You can’t teach compassion. You have to learn it on your own. But you can educate people [about racism].

People get away with [racism]. You see videos on TV [of people being beat up by cops]. They always make excuses. There’s no guilt. There’s never accountability. Who do you complain to? There’s nothing that gets done about it. It’s bullshit.

So, for change, I think the people at the top have to recognize that their policies are wrong. They’re killing people. And then they get away with it.

I work at MOUHSS, an outreach program for the Campbell River community. We have a doctor on board, mental health counsellors. We care about harm reduction. We supply sandwiches, drinks to people who need it. I’m also a peer leader for the Community Action Team. I go around the neighbourhood, I engage myself and talk to people. This is pretty cool for me and it’s something that I don’t need training for because it’s my knowledge and my wisdom. I love it. I feel like I have a purpose during this journey.

I have been working with the MOUHSS for six months. I am proud of my ability to help people, my community and give back. I also know that sometimes I can connect with people who live outside or are using, differently from “professionals,” because people who are homeless know I have been in that world and feel safe talking to me. This helps them to get the help or things they need in a non-judgemental way that feels safe for them.

I did not look for this. It came to me. I’m finding out my role in this peer work is valuable. Like, you can spend millions of dollars on education and counsellors and doctors. But with [my experience], it’s like 45 years of research! So I’m pretty valuable. It’s healthy for me to just be accepted by these professional workers.

I got accepted for me being me for the first time. I didn’t have to be defensive. But I know racism is still here, like against the Native [Indigenous] people more than me, it’s pretty bad out here. I wouldn’t be where I’m at today without my mental health counsellors. I had good counsellors and sponsors. I feel like for the first time, I am a part of something; I can really let my guard down. I don’t have to be defensive because the people are like me; they didn’t look at me as a colour. So that was our common ground.

As told to Kamal Arora

Ray lives in Campbell River and is a peer worker with the Mobile Outreach Unit for Health and Support Services (MOUHSS), which provides community health harm reduction and mental health care, and the Campbell River Community Action Team (CAT), which works on overdose prevention and stigma reduction