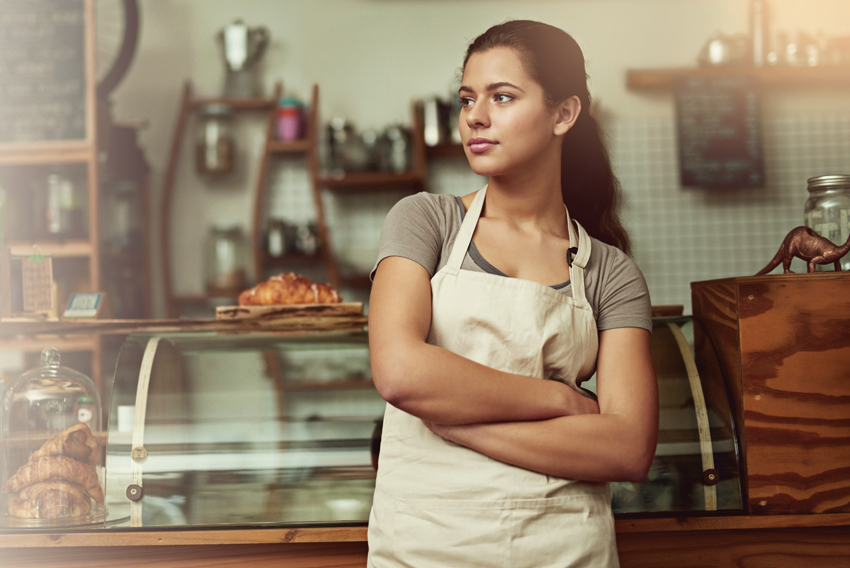 I moved from Calgary, Alberta, to a small town in eastern British Columbia on April 1, 2017. Coincidentally, it was also my first day of sobriety: I had just stopped drinking alcohol.

I took several months off to work on my recovery before re-entering the workforce. I took care of my mental health and built a foundation for mental and physical well-being. Since early childhood, I have lived with anxiety. In recovery, I began to do some very serious and hard work to minimize the impact of anxiety in my life. I felt stronger and stronger with each passing day, week and month. I began a job again in August of that year, just before I went back to school in September to begin courses in social work.

Like many jobs in rural BC, my job was a low-paying, hospitality-based service job. I opted to work for a small café business that provided locally made baked goods. I felt that working in a small business in a small town would be ideal for me, as I was in recovery and focused on building up my mental well-being. I thought the business would offer a tight-knit, small-community feel—and a sense of teamwork and closeness.

I quickly learned that many people in the area had grown up together and had lived in the community most of their lives. Many had low-paying jobs and felt stuck, without the opportunity to obtain higher-paying jobs or advance their careers. I also learned that many people resented those of us who hadn’t grown up in the community, especially people from Alberta because of the widespread belief that Alberta is prosperous.

About a month into the job, when my colleagues learned that I was going back to school in addition to working at the bakery full-time, I started to experience bullying. The bullying was inflicted primarily by the female store manager and one other female employee. I was yelled at for making mistakes that I hadn’t made yet. For example, as I was cleaning something and stopped to wash out the cloth, I’d be yelled at for not finishing the job because I had paused to wash the rag. I was often sworn at for doing an order entry slightly differently from how the manager wanted it done, even though I’d still done it correctly. I was frequently yelled at in front of customers—for example, when I asked for additional help at the till when the customer line-up was long. I was even belittled and yelled at for being friendly and talking to the customers, even though it didn’t affect my ability to ring customers through quickly.

Many other employees, all of whom were female, experienced similar bullying, but many of them felt powerless to stand up to it because they didn’t want to jeopardize their livelihood when they had mortgages and families to support. We supported each other, but as the bullying progressed, the impact became more and more severe.

I finally brought the issue up to the owner and made note of some of my experiences in my performance review. One of the questions in the performance review was “Do you find it hard / easy to maintain a positive attitude in the workplace?” I answered that I tried really hard to stay positive and address customers with a smile on my face but that I found it harder to do when I’m screamed at (sometimes in front of customers), sworn at and constantly belittled when I have done little or nothing wrong. But the owner literally shrugged off my comments and ignored the concerns I brought up in my performance review.

Unfortunately, however, many of my comments, which I had taken care to relay in a positive and professional way, were relayed to my manager, who then used them to continue to bully me. The bullying got progressively worse. My shifts were cancelled with less than 24 hours’ notice and my manager would give me the silent treatment for days at a time—when I wasn’t being screamed at or sworn at.

Over time, this treatment had a detrimental impact on my mental health. Because of my previous substance use and mental health issues, I had purposely worked on getting myself to the point where I wouldn’t allow anything or anyone to negatively impact my mental health. I had honestly hoped that by addressing the bullying with the owner, the situation would improve, but it only made things worse.

But while the bullying increased my anxiety, now I knew what signs to look for: I recognized when I had to step away from the toxic situation. These signs included my increased anxiety, depression, decreased and poor-quality sleep, a decreased ability to focus and concentrate, brain fog, social isolation and physical symptoms such as stomach upset and decreased immunity.
Fortunately, I was in a financial position to quit and take a few weeks off while I found other employment. I feel like I am one of the lucky people; I didn’t have to stay and deal with the ongoing bullying simply because I was financially strapped or had a family that relied on my income.

Many other people who worked there didn’t have the same freedom, even though they were experiencing the same types of bullying that I experienced. They felt like they had to stay because they had no other financial resources or employment opportunities. People were afraid to leave their jobs because they needed the pay cheque or were afraid of repercussions if they spoke out about bullying behaviour. One or two employees spoke to the owner; he promised to address the situation with the bullies, yet he never did.

Despite this, during my time at that particular small business, at least four other people quit because of bullying. These four people were good, hard workers; they would have been much harder to replace than the manager. It’s difficult to find a manager who not only doesn’t bully employees but ensures that other employees aren’t bullies themselves. In hindsight, I think the owner may also have had issues with conflict and confrontation; he preferred to not address the situation in the hope that it would go away.

I’ve been in the workforce for 25 years and unfortunately this isn’t my first or even second experience being bullied or witnessing someone else being bullied. In my personal experience, bullying often happens in workplaces—by owners and managers or by co-workers because the owners or managers look the other way. Often the bully can hide behind policy that maintains the status quo: management is often reluctant to fire people for being bullies, especially if bullying doesn't impact their other performance, and it takes time and effort to find new staff to replace the bully.

When I left my job, I went for about three weeks without work while I was looking for another job. But leaving the job was definitely the right choice for me. At the end of the day, I realized that everyone has their own set of issues, but it’s not my place in this world to have to take on everyone’s issues. My mental health is more important to me than that.

But I feel that it’s important to share this story—to raise awareness about how common workplace bullying is—so that people who don’t have the financial freedom to leave a toxic work situation and those who lack the self-esteem to make a workplace change know that they are not alone. Many of us have experienced being bullied at our jobs. Bullying doesn’t stop when we graduate from the playground. It continues into adulthood, with the same negative consequences for the mental health and self-esteem of its victims.

Chelsea has a diploma in human service and a certificate in recovery coaching and substance use interventions. She works with clients to hold interventions for loved ones. Her service dog, Winston, provides assistance for her generalized and social anxiety. She is currently working towards a degree in social work